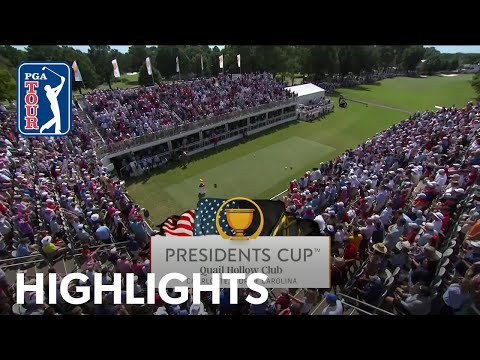 The Presidents Cup returns for the first time since 2019, after the COVID-19 pandemic delayed the event by a year. 12 players from both the U.S. Team and the International Team will descend upon the Quail Hollow Club in Charlotte, North Carolina, the regular home of the Wells Fargo Championship. Both Justin Thomas and Max Homa have had success at the course, with Thomas winning the 2017 PGA Championship and Homa claiming victory at the Wells Fargo Championship in 2019. A record 14 players will be making their Presidents Cup debuts this year, with 2021-22 PGA TOUR Player of the Year Scottie Scheffler and Collin Morikawa among those lining up for the U.S. Team for the first time, while Cam Davis and Tom Kim are two of the eight rookies for the International Team. Presidents Cup veteran Adam Scott will be making his tenth appearance while Hideki Matsuyama will mark his fifth appearance this week. The competition will see five Foursomes played on Thursday, followed by five Four-balls on Friday. Saturday will see four of each of these formats played, before the competition concludes on Sunday with 12 singles matches. The International Team will be looking to win the Presidents Cup for the first time since 1998, while the U.S. Team will want to make it nine wins in a row when the competition concludes on Sunday.